For the duration of my illness, this blog is continued at this link 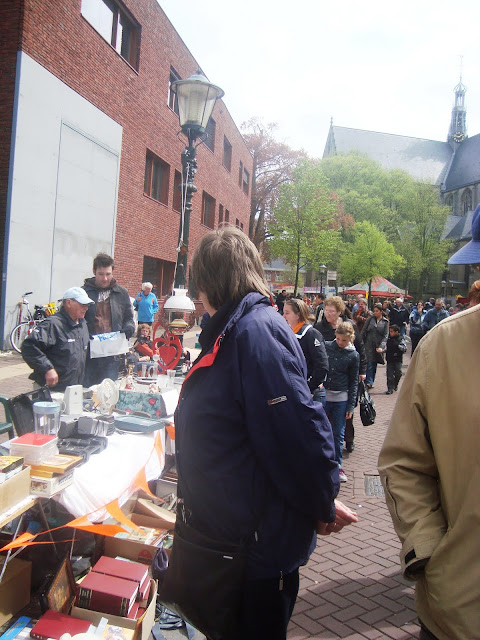 The camera being full of images that are obviously reports of events of great moment, I am forced to divide the month owing to the liimitations of blogger. The first Great Moment that I have to report, is the Queen's birthday. The biggest street market, involving as it does the whole country. 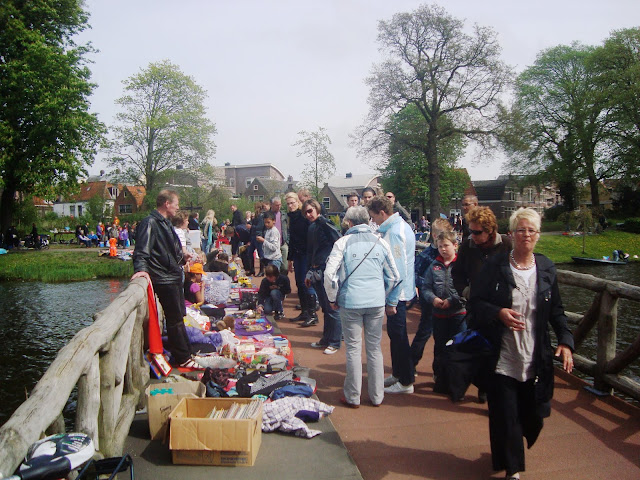 People turn out thier attics and pour the contents onto sheets op tarpaulin and sit in the sun to get rich. Meanwhile, thier children are touring the other stalls and buying up stuff to ensure that what is taken home at the end of the day is different in content. but equal in volume and weight to what was brought. The result is that all this stuff moves from one attic to another ready for another year.

These people know how to party. 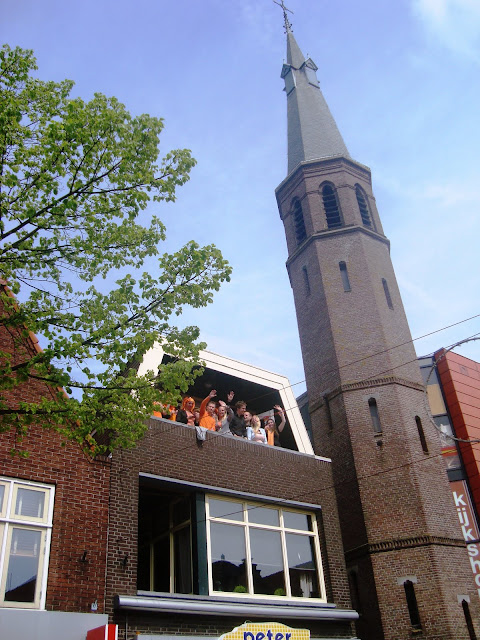 The city of Alkmaar believes in Art for the petite bourgeoisie. As we see here, an artworkcan also be functional. In this case, a receptacle for waste products. Note how a citizen with panache has used his discarded ice-cream to enhance this three-dimensional collage. The grouping around the base is electrifying, and as for the crown, well, it takes the breath away. As does the smell. The Dutch word for art is 'kunst'. 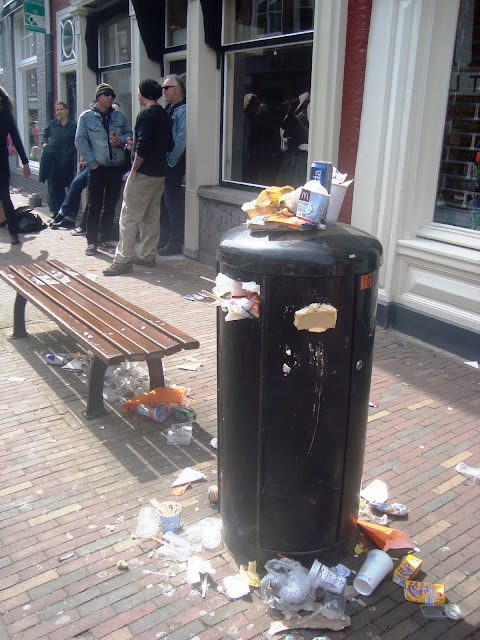 We have been doing the Queen's Birthday for about 30 years, but the stuff on offer is always the same. I am sure there is a factory in a third world country turning out broken and obsoltete stuff and filling shiploads of containers for Holland. Wherever you look there is half an oar for a rubber boat with dodgy patches, a relief plate for the wall, a bedpan on a long pole, Scalextric tracks with two wheeled cars, thermometers with bleached scenes from a Costa somewhere. Polaroid cameras. Floppy disk and zip-drives for your computer. Cassette players by the million, VHS tapes by the trillion, little boys painted on velvet with tears rolling down the cheeks, a defective electric fire from the thirties (element of doubt perhaps), Commodore computers, hamster cages with dessicated hamsters without food or water ('buy me, and save my life'). Flippers and snorkels with no ping-pong ball, ping-pong tables with three legs, toasters, coasters, plastic coat hangers, plastic coats, bicycles with oval wheels and no saddle, Chanel nr 5 in jerry cans. And everywhere, drunken youths in orange shouting Olé, Olé, Olé, Olé before falling over. It is all very joyous. It also enables the Royal Family to travel around amongst thier subjects, smiling radiantly and letting everyone see how popular they all are. Last year someone tried to run them all down with a car. The royal family continued to smile radiantly as they fled for thier lives. The best part is the music. Great rock bands with megawatts of power down to 7 year-olds with little music stands and a saucer with five cents. Aah,  the scraping of the flutes, the squeaking of the fiddles. I always go out with enough money to spread around any  kids playing, or trying to play an instrument.

You can see Bernadet about halfway across. She is trying hard not to be sold the bridge. 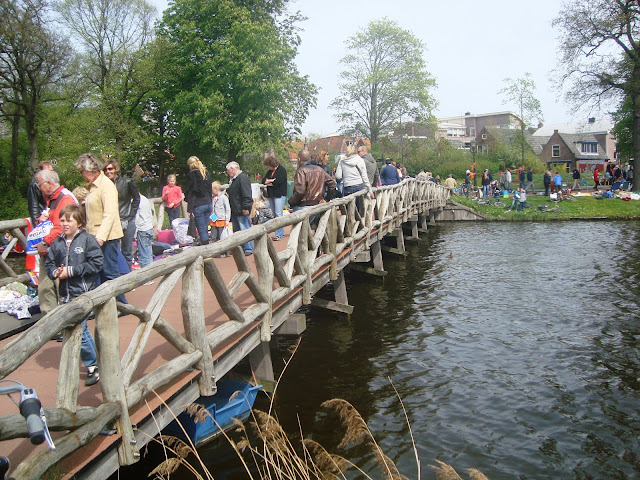 At this time we also have the Limmen Mosaic days. Limmen is the next village down, and for about four days the whole place goes mad to produce flower sculptures. They take months to plan and to get the flowers at thier best just at the right time. And the its all guarding against birds and cats and drunken youths shouting Olé, Olé, Olé, Olé. Preening and fussing to straighten out any bent petals, constant spraying with mountain spring water for extra freshness. It's all a bit like the Vegetable Competition in Wallace and Grommit  The themes are mostly local issues or national politics. The sort of things the Sun wouuld have as headlines a few years ago. "Gotcha" "Come off it Wilson" "Never had it so good"etc. 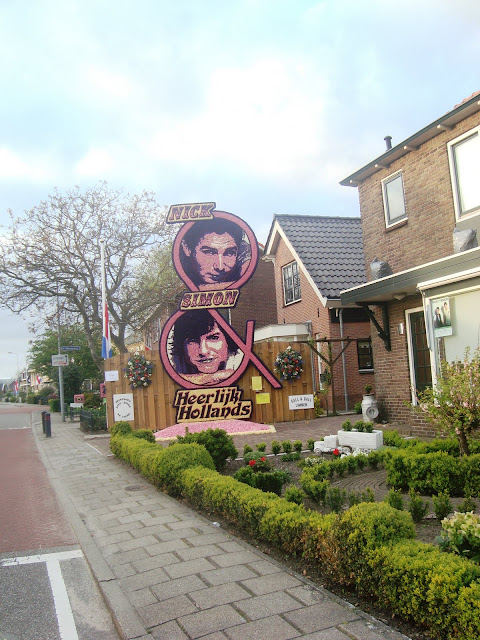 Something about Iceland going bust, the Ash Cloud and either Nuclear Waste or Please Buy a Mercedes 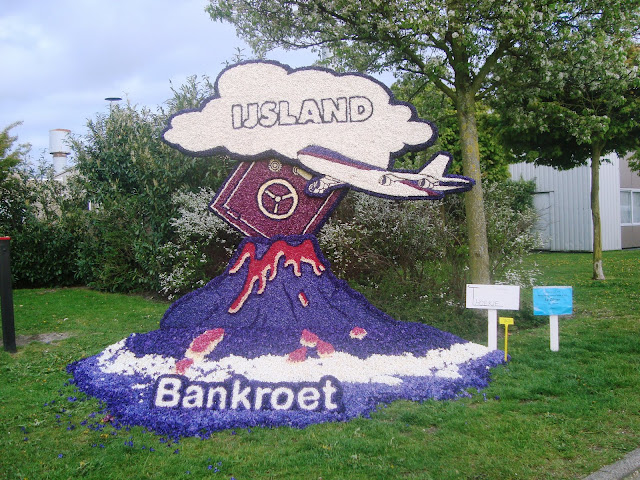 The Wave Prikkers. Ideas anyone? 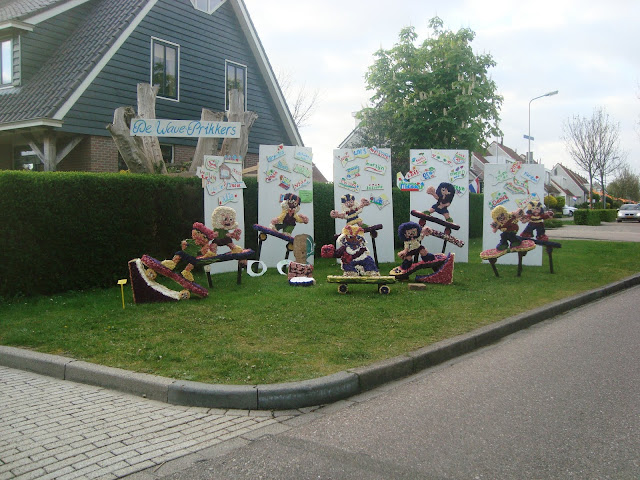 This was the big daddy of all flower mosaics. No idea what it is about except that Himeji in Japan is famous for being mountaineous and having lots of feudal castles and no cycle paths or snackbars where you can get a frikandel in a roll. Limmen on the other hand is totally flat, has no castles and is full of cyclists using the cycle paths to travel to and from the many local snack-bars specialising in frikandel rolls. Not difficult when you put your mind to it. 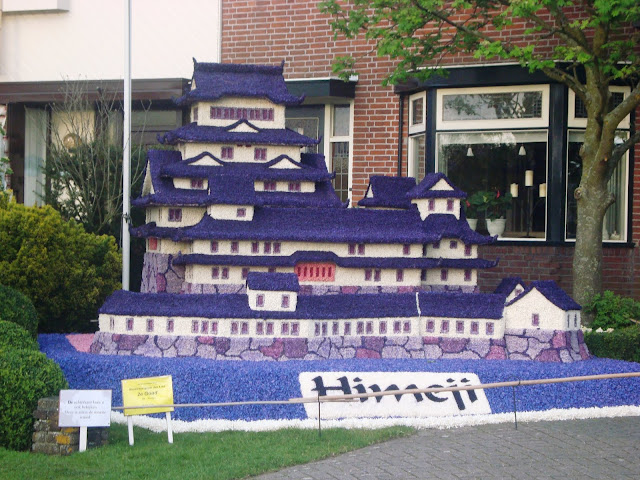 And finally, we have a new face on the farm. this duck has a damaged leg and is presumably not in the running for success in his own community. He found a hole in the net that protects Opa's pond from birds. didn't stop this one, did it. He is king of his own world now, or he thought he was. The fish got miffy with him and attacked. (some of the fish are twice his size), and for a long time he stood on the slippery glazed flower-pot to avoid contact. He is now accepted and follows people around hoping for his favorite snack, toast and marmite. 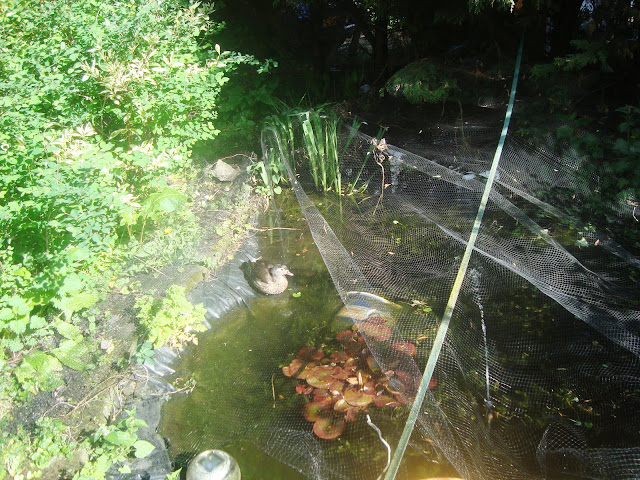