I don't have time to fill up more nonsense, so enjoy some pictures of Heiloo and its environs, and I will make something up to go with them later.

Some water on the way to the Pony Club 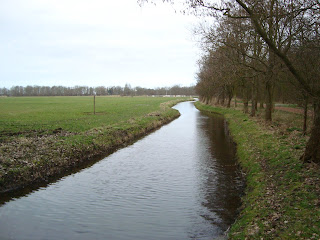 And a bunch of Snow Drops in the woods. 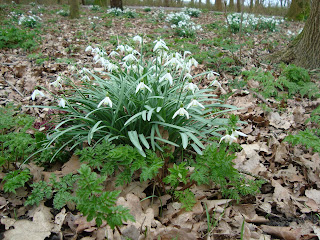 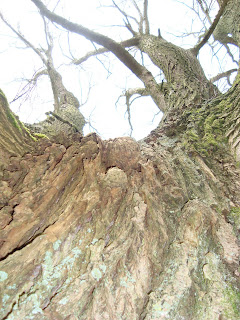 Looking up a tree with lots of bark, but not the one I meant to look up. Barking up the wrong tree or something. I need my pill. 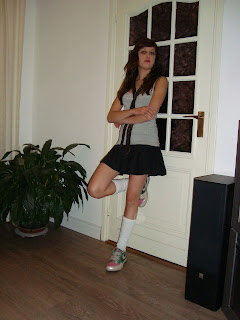 This is Emmz showing off her outfit for the School Party.

The chosen theme is 'schoolgirls , which somehow does not seem to be particularly original since it is a place where girl go to, er, school.
Van Spike op 31.3.09 Geen opmerkingen:


I'm not sure what this picture has to do with anything, but it fills up the page quite nicely. 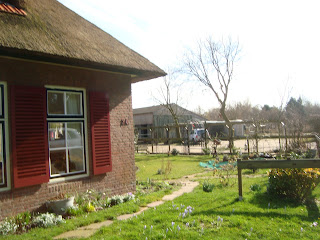 It is now about 4 weeks since Berny got ill. Things are going a little better, but she cannot stoop or sit down for long. It is still vey painful and she sometimes tries to do too much at once. The bed in the living room does enable her to have a social life what with the constant ebb and flow of the coffe table visitors, the pots always warm and on constant standby. And the bed is perfectly located as an ideal central observation platform from which to direct execution of household tasks and to effect the dictation of terms generally and the calling of any odds needing a call. And with a panoramic view of the carpark, the stall and the Hoogeweg, not to mention the web-cam, nothing escapes her eagle eye. We, along with her colleagues all wish her a speedy recovery, especialy those who would normally be at home for most of the week and the accountibility of whose movements may have gained in the rigidity department. We go twice a week to the fizzio. I have just had my first trip taking Bernadet and found it most relaxing watching someone else being pummelled, stretched and distorted by a muscular lady therapist. I found it so relaxing that I fell asleep and had to be awoken as my snoring was disturbing the session.
I digress at this moment. I am still in the Open Learning Centre. It is rather quiet as it is Exam Week. A group of charmless young ladies has just entered. They have nothing to do and are fully dressed for going home. Scarves, raincoats the lot. Some of them have thier scooter crash helmets and gloves on, and are having loud but muffled conversations from the insides of their helmets. They cannot go home yet as they must await a piece of paper. They are not the brightest of the bunch and I have not seen them here before. One appears to have furry moonboots and several overcoats. It is quite warm in here. She is complaining that she smells. "Ireen! Yer gottny Deo?". Irene produces from her duffle bag a huge cylinder that would be the envy of British Oxygen, and the large student, without unbuttoning her coat, manages to worm it through strata of wool and nylon until the offending armpit is reached. The insertion of the gas may temper the sweaty depression, but it also displaces the originally trapped air and forces it outwards, enriching itself as it passes through layers of cloth and plastic, collecting other smells en route. The deodorant, spearmint flavour, this mornings rain on wool plus the expulsion of foul, sweat-moistened air that has been trapped under layers of synthetics for god knows how long, pours over me in an avalanche. As if this were not bad enough, she has discovered a most interesting trick for our amusement. By pumping her substantial arm up and down, causing layers of wet fat to enfold and release the wet cylinder, she can cause the can to squeal and fart to the rhythm of 'Rudolf, the red-nosed reindeer' while her three cronies fall about the floor, cackling like witches in Macbeth. I have ejected them all, but not before requesting the use of the deo to spray around my desk.
Anyhoo, back to the Bernyherny of life. Poor Bernadet has been going around for a while with two huge elastic plasters in the form a a giant X from bum to shoulder. This is to pull her shoulders back, and she walks like a penguin following a plane flying overhead. It has been very hard for her and she has been voluntarily reducing the pain-killers to avoid dependence. Today the big X would be removed. The fizzio gripped the ends of the X. We all gritted our teeth and closed our eyes. When I opened mine, the X was gone with narry a wimper. Most disappointing.
Anyhoo, it's coffe time again, so I'll leave you with this picure which I entitle 'Merel on a horse'. 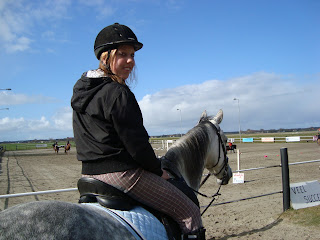 By the way, it is going much better with both Merel and Thijs. I think we have all changed and it is alll going along so much better. See you in a bit.

A sad tale of vandalism. 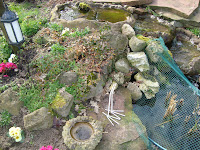 If you examine the photograph carefully, you may observe a pair of iron birds feet. The rest of the bird is gone, stolen on the night of the 15th, no doubt by some impecunious youth as a present for his girl-friend. With Alice aforethought. It was a magnificent white, porcelien Heron with, as mentioned, cast iron legs. In his haste, he probably did not notice that the bird was now legless, as indeed he may have been himself to have made such an error. What on earth will she think when presented with the gift. It cant even stand up on it's own. It looks about as sensible as the birdless legs by my pond. Should he care to contact me, perhaps we can come to an arrangement. I get the torso on even days, and he and Alice get the legs on the odd ones. All of the bird part of the time against part of the bird all of the time.

Before I forget, I was pointed by Merel and Thijs in the direction of Happy Tree Friends. This is just great. I reccommend!

PS. Stef - Flight of the Conchords on it's way.
Ps. Adam - New Cd from Kieran in the post - signed by the deity himself. It will take me a long time to get used to Kieran without Chris Jones, although Jimmy Smith is superb.
Van Spike op 31.3.09 Geen opmerkingen:

A kiss from Emma 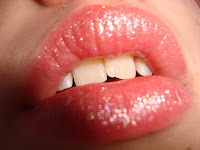 Sorry to have been away so long, should anyone have noticed in New Zealand, England or Canada. Sorry to Saj and Stef who were promised contact on Facebook but had to be content only with news of my visits to the toilet. I am personally not a great fan of Facebook as it is a bit like Hyves, which has taken the lives of our daughters. Lots of things happened this month, the most important of which were the loss of function in my computer and my wife. Poor Bernie has a hernia and it is very painful. We have all been ill at the beginning of the month with, probably, food-poisoning. Bernadette has an aging Auntie, single and for centuries a real party animal. Unexpected callers 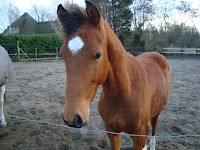 may be surprised to see gentlemen in dressing gowns lurking around corners trying to fade into the background. As a present, this jolly aunt was given a calendar showing on which days she would be picked up and taken to one or other young relative for a splendid lunch or trip to the theatre etc. On this occasion someone was ill and we all got it, including the jolly auntie. Dreadful it was. When using the bucket, make sure you are firmly positioned on a toilet. This was both-end stuff with a vengeance. I was under the impression that Bernadette’s back problems started with an unfortunate lurch towards the bucket in a mighty heave-ho, but apparently it started a few days before. Still, it would have made a nice story. Woman paralyzed by warm prawn sandwich. We have moved her bed downstairs by the garden doors. These said doors are not quite visible in our new 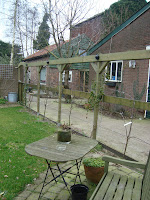 webcam, but should she go outside, you may see her shuffling around and give her a virtual wave. With luck you may even see her fall over, and since the camera has sound, you can catch every nuance of excruciation. I shall post a link to the camera, appropriately under the 'links' category. We are fortunate to have the camera, as it is the third on the same guarantee. The first went into free-fall after some hasty mounting and suffered concussion but no visible damage. Just stopped working it did. Can I have another? The second, you may recall, became for a vey short time, a fish-pond cam. There is one thing about cameras in water that you should be aware of. They do not float as such, but tend to plummet towards the depths taking on water-ballast as they go. I let it dry out for a few months, and, noting that only one week was left on the guarantee, I tried again. Another one sir? Yes, I'm afraid. This one has been very constant - until an hour ago. This one I have mounted in the lamp above the stable door out of the rain. I hope it is not pointing at the sun at sun-up. It is great to have the computer back again, although under Vista. Not everything is working as it should, becaus 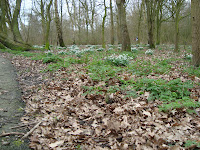 e Vista does not recognize the sound card. "Windows cannot open this file because there is no audio device. Windows is looking for a solution to the problem. Yawn. Little green slug going round and round and round. Yawn. Ah! Windows has found a solution to this problem. Press here to access the solution. Eager pressing. Windows suggests that you purchase a new sound-card. Click here for a list of Microsoft-approved hardware for which Microsoft will not be collecting any excessive kick-backs, probably. Same with the USB docking-box and a few other bits and pieces. I am at work at the moment. It is exam week, and the Open Learning Centre is like a morgue. Herman the Skeleton feels quite at home, he says. I, nevertheless, have a function as a mine of information. Why, not ten minutes ago, a woman women stuck her head through the door to ask where th 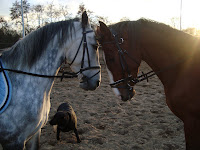 e toilet could be. It could be anywhere by now but I assured her that it was most unlikely to have moved and that she should proceed to corridor B. Suppose there had been another bout of the jolly aunties double-ended-belly-spasms in the air. I may well have averted a major trauma for the cleaners. I'm off to have some coffee. I shall intersperse this text with a few photos of Heiloo for the home-sick, and thank once again that fantastic family in New-Zealand for the trip of a life-time. Looking back at the photos last night made me realize how wonderful t was. See you after the coffee!
Van Spike op 31.3.09 Geen opmerkingen: