The Art Class - Jugs and Melons

I pursue a number of activities in order to stave off inevitable dementia and to make supposedly the best use of the time I have left. At a recent cremation we wandered through the graveyard, and I remarked to Bernadet that most of these people were younger than me when they arrived here. The cartoons for HEILOO-ONLINE fill a small part of the day between bath and breakfast. The writing is a bit blocked at the moment, but will reignite. Things are very busy at work, the house painting is almost finished, the holiday home needs attention, and our snooker team is about to take on the entire Third Division. I am scheduled on Tuesday to join battle with the ladies team 'Chicks with Sticks'. By what madness have I now enrolled in an art class? I am not sure why, but doing sketchy cartoons is not enough and I would really like to see if I can draw and paint properly. I was also inspired by a program on the BBC about a nude model who poses at art classes. The lady was stunning, but the students, mostly middle-aged men, did not seem to be doing a lot of painting. One chap just stared at this beauty for half the program until the teacher looked at his blank canvas and indicated that it might be time to open his paintbox. This is for me, I thought. I recall from my boyhood that my father joined the Camera Club 'Life Studies' course. Nobody noticed that he didn't have a camera.

The first evening we new students joined in a cup of coffee and discussed our motives with our lady teacher. 'Will we be doing people' I asked tentatively. 'Oh yes, portrait painting is very popular'. 'But will we also be doing, you know, nudge nudge, live er.. that is to say, people of the opposite.. er.. without any, as it were, encumbering sort of garmenty stuff . I have a thing about garments. I can't draw or paint them, it's just a phobia, rather silly really!'.

'We shall be getting straight into the basic forms. Tonight we shall be concentrating on the jugs' she said, as my cup and saucer crashed to the floor. We all rushed off to the studio, to be confronted with the jugs. After drawing them, I said that I had finished. 'You have still space on your paper, she said. 'More jugs, More Jugs', I did more jugs until it was time to go home. With my jugs. I wondered if Michaelangelo went through the jug phase. Probably not, else that scene in the Sistine Chapel with Angels reaching up to God would be one where they are all holding up tin mugs, and God is wielding an astronomical coffee pot. 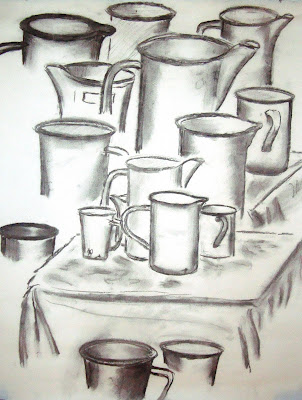 The following week, I again enquired when would we be moving towards the parts they seldom mention. 'We shall continue to explore the round forms, the globes. We shall be doing.... the melons. I did not allow my imagination to fool me again, and sure enough, the melons were ... just melons and gourds. 'More Melons. More melons'. Until it was time to leave. With my melons. 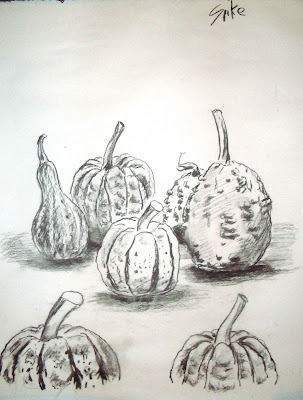 As I left, I saw a door with the note MODEL CLASS. I coughed loudly and shouted 'Sorry, wrong door' before opening the door. They all turned to look at me, except for the nude model. She was bald and had no face. She had been pensioned off from C and A after a long carreer as a shop window dummy. I shall keep you all informed. Stef, How is your passport problem? Can you and Jas still get over? I can help with the ticket. Love you all. Dad.

From Bauke and Karolientje, this amazing gift. Forget the Turin Shroud! This is a real gem to share with you. I shall take it to work and process the teachers sandwiches while they are not looking. Many of them toast their sandwiches. Watch carefully for reports in next weeks Christian Herald and the Catholic Times. 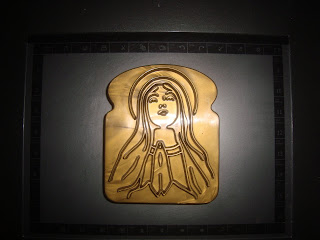 The instructions read:
Press into a piece of bread and insert into the toaster. When the toast pops out, behold, a miracle!.
Van Spike op 11.10.09 Geen opmerkingen:

First sight of the progeny pf the Amazing Virgin Birth. All six are well. I hope to have the BunnyCam fixed up this week, but must first sheath the cables in carbon steel. 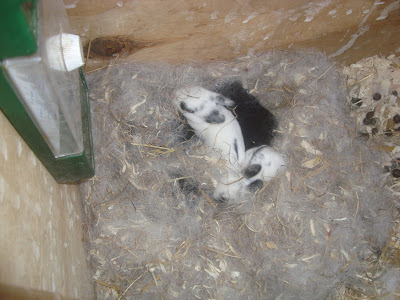 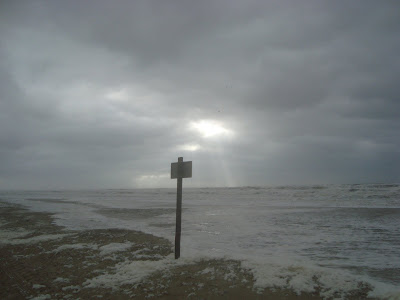 The Dutch have a saying. They like to go onto the beach to "uitwaaien", or wave yourself about in the wind. Something like blowing away the cobwebs. The beaches are full when it is hot, deserted when it is not hot, but full again when there is a mighty wind. What they seem to like best is a real sandstorm, so that they can walk at forty five degrees into the wind while the sand stings their eyes and penetrates their necks. Because when it is time to go back, the wind is pushing you along and the sand is no longer cutting your face to pieces.

Heavenly, just like banging your head against a wall to feel so good when you stop. 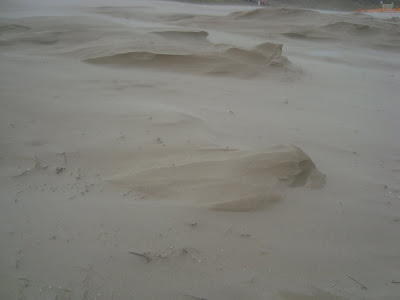 Big waves out there 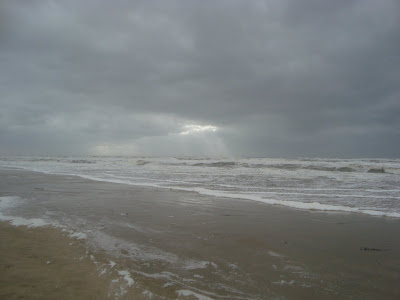 More big waves, for want of something more interesting to say 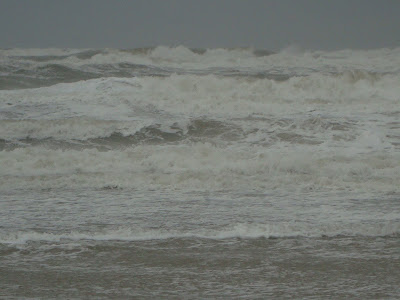 For this picture I lay on wet, very cold sand. I hope you all appreciate my sacrifice 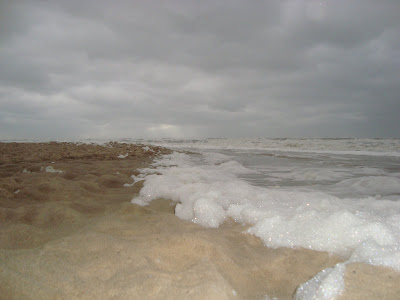 Isn't this fun! Shall we just do another kilometer or two? 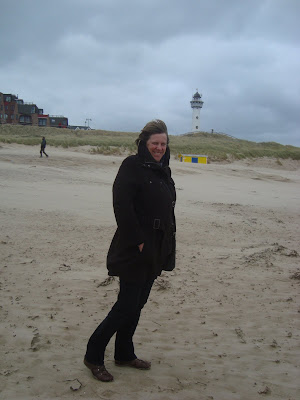 Opa is 83. This year the celebration was in Irene's house. As usual, the house was filled with Opa's seven sisters and their spouses forming the hard centre of the celibants. Throughout the day, flying vists by all and sundry and thier friends and relations. A Dutch birthday consists of sitting in a circle consuming vast quantities of coffee and cakes followed eventually by beer and spirits, and generally regurgitating the past. The circle begins quite small, just a few people round a table. They can of course enjoy a quiet conversation in which they can actually hear each other, and what is more important, listen. As more people arrive, the circle increases in diameter. Furniture is moved about to accomodate the newcomers, ensuring that nobody will feel left out, even if one or two may prefer to fade into the background and form private circles. The result is that everyone is too far away to hear all that is happening on the far side of the circumference, and we now have too many people for polite discussions. The circle now has many separate dissertations zapping across its infinite diameters, each trying to assert its authority by increasing volume in order to absorb or subdue the competition. As the alcohol takes hold, everyone begins to laugh and sit back to enjoy the by now incomprehensible wall of noise. All great fun.

I was not actually present for most of the time as Wednesday is my fixed golf day, and my partner had already booked. By the time I did return, almost everyone had left, but there were still a few cakes. And so much food that we all moved back to make an evening meal of it.

Since I was not there, I cannot properly comment on the photos taken by Bernadet. But I will. 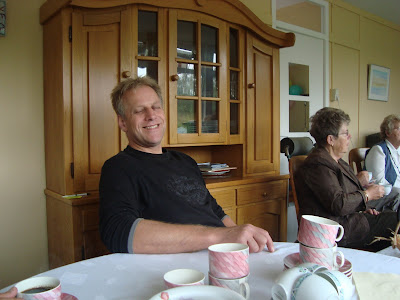 The adorable Auntie Sjaan in the fetching blue waistcoat, flanked by Aunties and uncles. 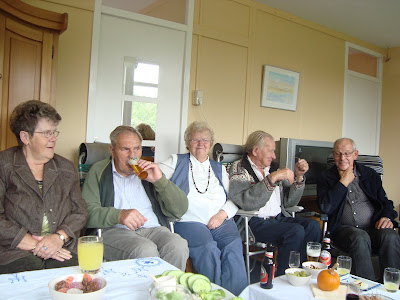 Opa and two of his sisters. 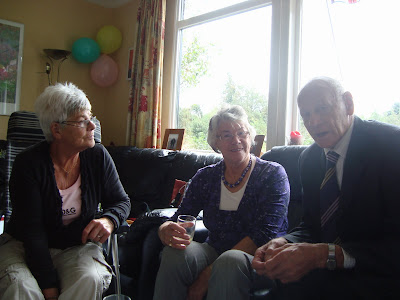 Consumers is what birthday parties are all about. Jelly and icecream and all. 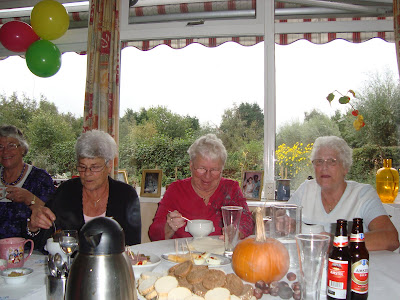 I sadly missed the musical cabaret. I had been given songs to learn on the guitar. I spent three days learning the things, but it was all over when I arrived from the 18th hole and the show went on with one guitar less to support the clarinet. All the more annoying since I had spent hours and hours learning some of the songs I like least, to put it mildly - "Heart of Gold", "Me and Bobby McGee", "Country Roads" etc. It only needed "Mr Bo Jangles" to complete the set. 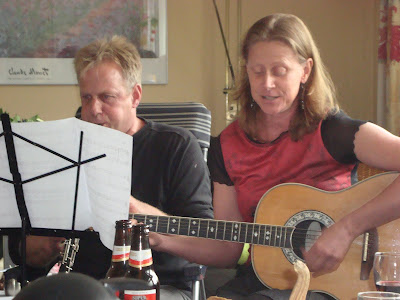 "This next song is about...er, Jan, we're finished the song and it's time for the next...You can stop now, like between the songs. Um, Jan, about that next song we talked about...Jan? Never mind." 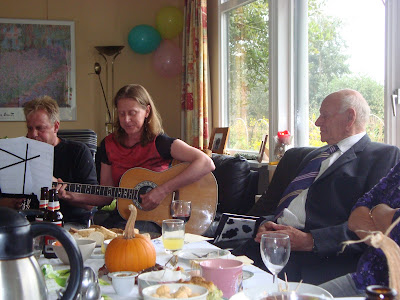 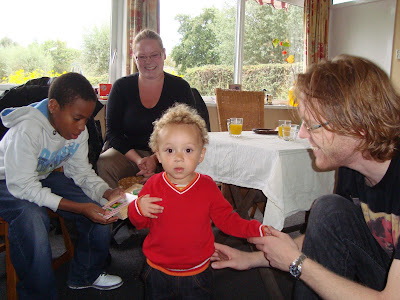 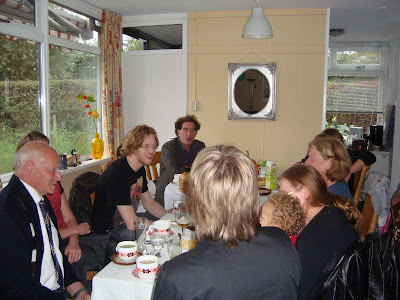 Dinner time again but from a slightly different angle it would appear. 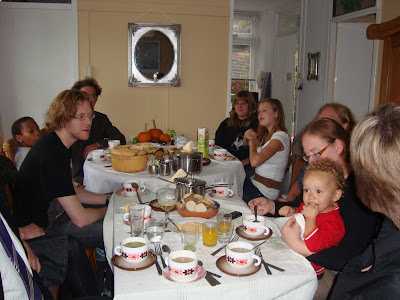 Myself and Emz are late comers but there are a few stalwarts present, and as you see, still an awesome spread of culinary delight. 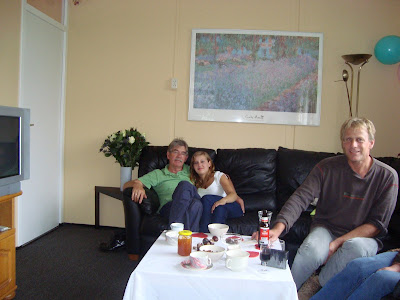