Emma having had her baby, it was decided that I and my espoused would travel to England to pay our respects at this nativity. We only had a weekend and would not have enough time to satisfy all as it were. We would therefore fly to Southhampton and hire a car, spend Saturday at Auntie Anne's and Sunday to Aldershot, where Young Stef and entourage, including the new baby plus family Cris would assemble for Sunday Lunch at an establishment suitable for tiny children. A pub. We would have only a few hours before we would leave for the airport to fly home. And hope that our own house was still intact and not also become a public house under the stewardship of our teenage daughters. We went on a bus to get to the plane, and found that the plane was just like the bus inside. No room for catering, although a bag of nuts could be purchased for a modicum.
When do we take-off? 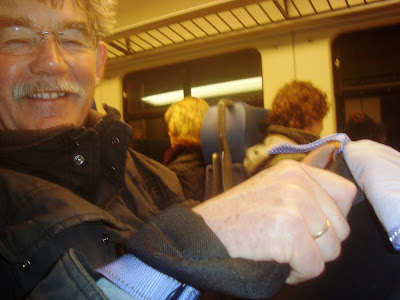 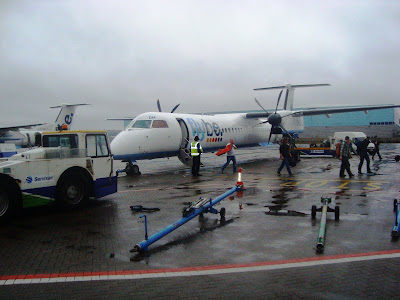 The problem with these cheap flights (17 euros per person - Amsterdam to Southhampton) is that they are not cheap. Hidden extras were piled on until we could have chartered the plane for less. It was also extremely noisy because of the whirly things where one would expect a sleek jet engine to be.


The same confusion over the price of a hired car. A new Peugot with so many gadgets that we were afraid to touch anything. We also could not get the boot open, partly because there is no handle. The frogs know that you have to put your hand on the rear window just above where a handle would be. You are required to sign a bit of paper that allows Avis to plunder your credit card if anything happens outside The Agreement. Like driving it. When I say sign, it is more a question of having a biro thrust into ones hand, while a brylcreemed sycophant moves some papers under the tip to form a signature. Apparently the tank is full on delivery (but the needle apparently stuck at half-full) and is filled again on return. From my bank statement it would appear that a fleet of tanker-lorries were required to make up the difference.

To Auntie Anne's to enjoy her bountiful hospitality. Even giving up her bed, while she slept in her office under teetering bookshelves sagging ominously. I am never allowed to sleep here when I visit because the whole lot might plummet earthwards. She herself is immune, it would seem. 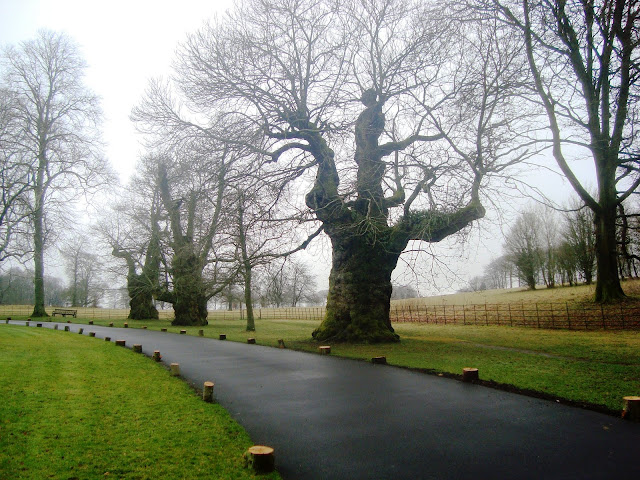 Off to Stourhead, a National Trust stately home in 3000 acres of gardens with a lake in the middle that is often mistaken for the Mediterranean. In the past, rich people toured the world gobbling up artifacts and treasures from the servile populace. Stuff that was 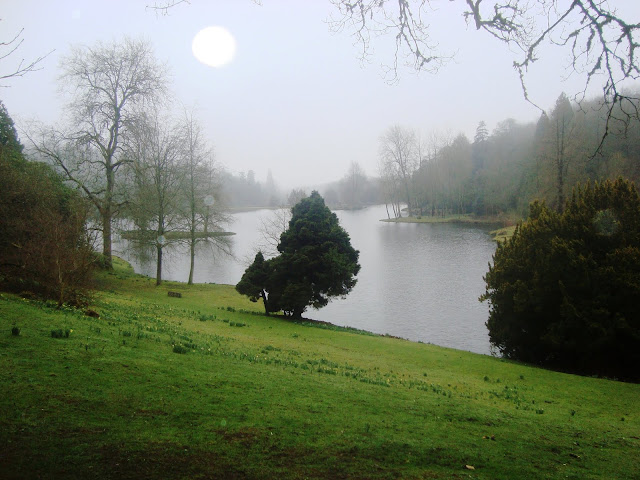 too big was copied and built anew in places like this. The lake is ringed by temples of all the worlds religions. Apart from a south-pacific island where they worship the duke of Edinburgh. 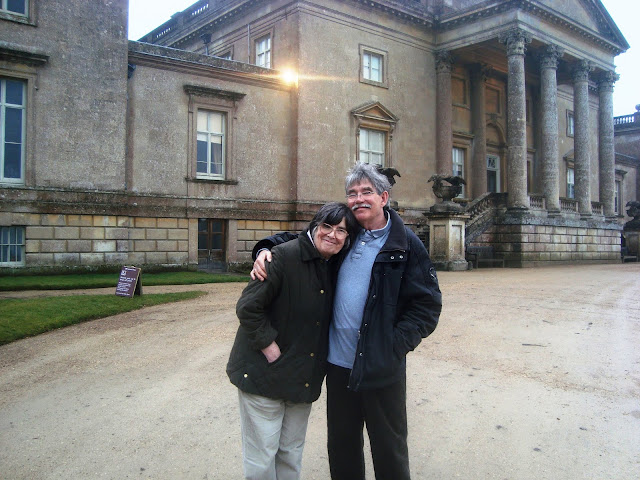 The house is a bit run-down and staffed by old ladies in tweed who lurk in the shadows, gliding out to confront the unwary tourist with reams of knowledge. "Yes, it is a conundrum, isn't it? I can tell that you are puzzed to see rococco cupolas atop a byzantine colonade. The explanation will certainly surprise you! In 1723, Sir John Poddles returned from the second Frog War ....". We see an escape route. "Good Lord, look at the rampant scullions on that magnificient DOOR." We rush, and from behind ..... "Aah! Scruttocks Portico! In 1713..". We shake her off and hide behind a conjugated arris of the ninth dynasty. 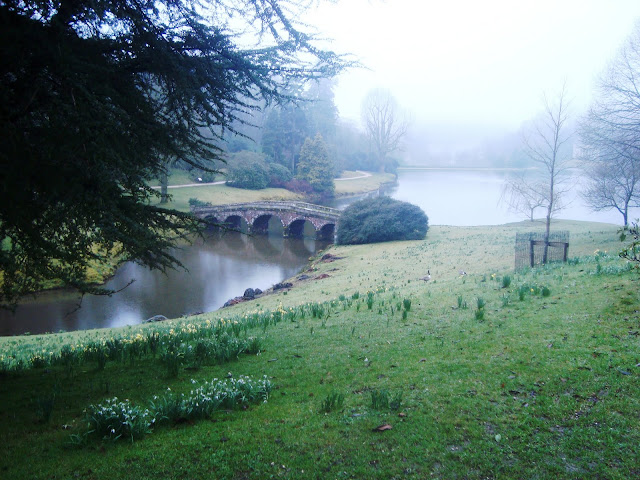 A ghost in tweeds looms. "Aah! Scruttocks Portico! In 1713.." while from the room we have just left, a careless traveller groans as he as he is dragged unwillingly into the mystery of rococco cupolas and byzantine colonades. The row of cottages are for the ostlers, although there has not been much ostling for a century or two.
The gardens are magnificent, but I fear a day or two, strong shoes and thorn-proof trousers are needed to see it all. We have spent a pleasant day here. We make make our way to the carpark, fending off old ladies. "Aah. The Lord Hoare Memorial Car-Park! In November of 2004, the Incumbant ordered Gravel to be strewn in bays 4 through 16, and later that year a Rubbish-Bin to be.....' Go away.
We drive back to Salisbury, half expecting old ladies at zebra-crossings to waylay us. "Aah! The B3092! Originally called Crab-Lane, the Norton-Ferris to Maiden-Bradley section was completed in..." 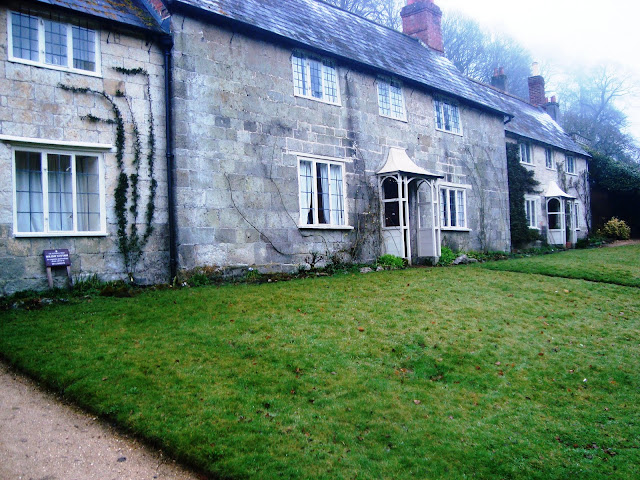 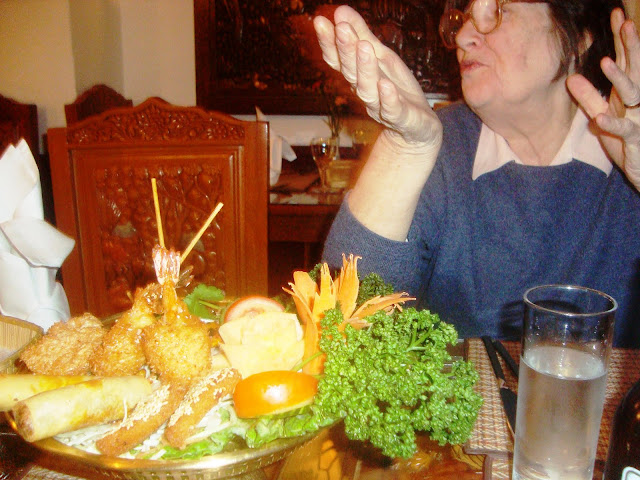 Anne underestimates the University Challenge speciality for her first dish. It turns out to be a starter for ten.

Saturday night and we are off to a Thai retaurant. It looks like somebody's front room, but then you are led upstairs and through lots of other little rooms, each with two or three tables. It's as if the thais bought a basement flat and then took over rooms in other peoples houses one by one without them noticing. "Surely, Cynthia, we had another bedroom hereabouts?" "Indeed Charles, and I can't seem to find the trapdoor to the loft. These houses need accoustical insultation my dear. I can hear the sounds from that Thai restaurant four doors along. It's almost as if people are eating their Kaeng Karee Kai right above our heads!"


Sunday .... went to lunch with the families of Stef, Emma and Cris. Owing to the limitations of Blogger, I refer you all to March 2, which is the entry before this one and which you probably have already read. In the meantime some photos of Bernadet getting broody. 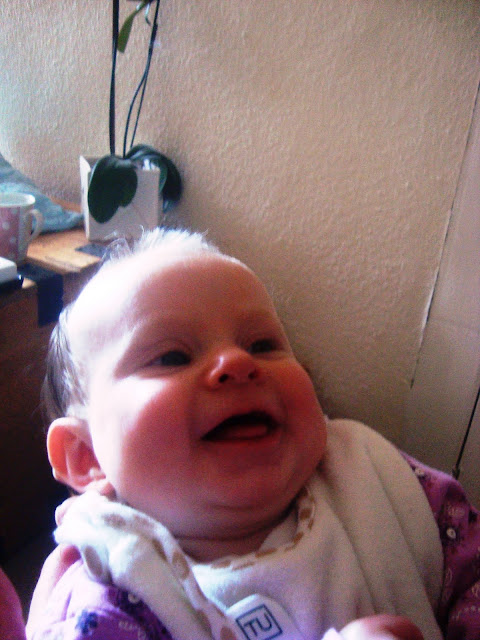 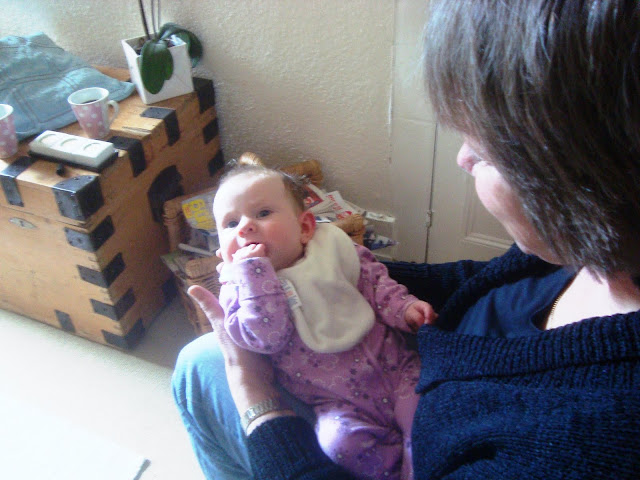